The large, multi-sheet map Calontiriæ Regnum Descriptio depicts the SCA Kingdom of Calontir in the style of sixteenth century cartographers such as Ortellius, Mercator, Speed, and de Jode. Composed of six seperate sheets, the inked-and-painted portions of the map measure a full 4ft x 3ft. It was awarded the Queen’s Prize at the 2018 tournament.

A map of this scale was a new undertaking for me (having completed a smaller three-sheet map of the northern Dutch provinces for last fall’s Queen’s Prize). The work researching and then producing the map was relatively considerable: about a two full months of effort and late nights to research topography, settle on ornamentation through numerous rounds of pencil sketches, applying inks and paints, and then writing up accompanying documentation.

Of most obvious note is the map’s orientation: South is at the top of the map, not North. This is in keeping with examples taken from numerous extant sources (see accompanying documentation).

While the Society is broken down into a Known World of many Kingdoms, these disparate realms often share borders with modern national, state, and county borders, making it difficult for a viewer familiar with the outlines of his or her own American state to approach the Kingdom with any sense of foreignness. It is my hope that, by inverting familiar conventions, viewers will be forced to interpret this map on the basis of what is actually shown by way of baronies, shires, and foreign kingdoms, rather than by overlaying familiar state lines 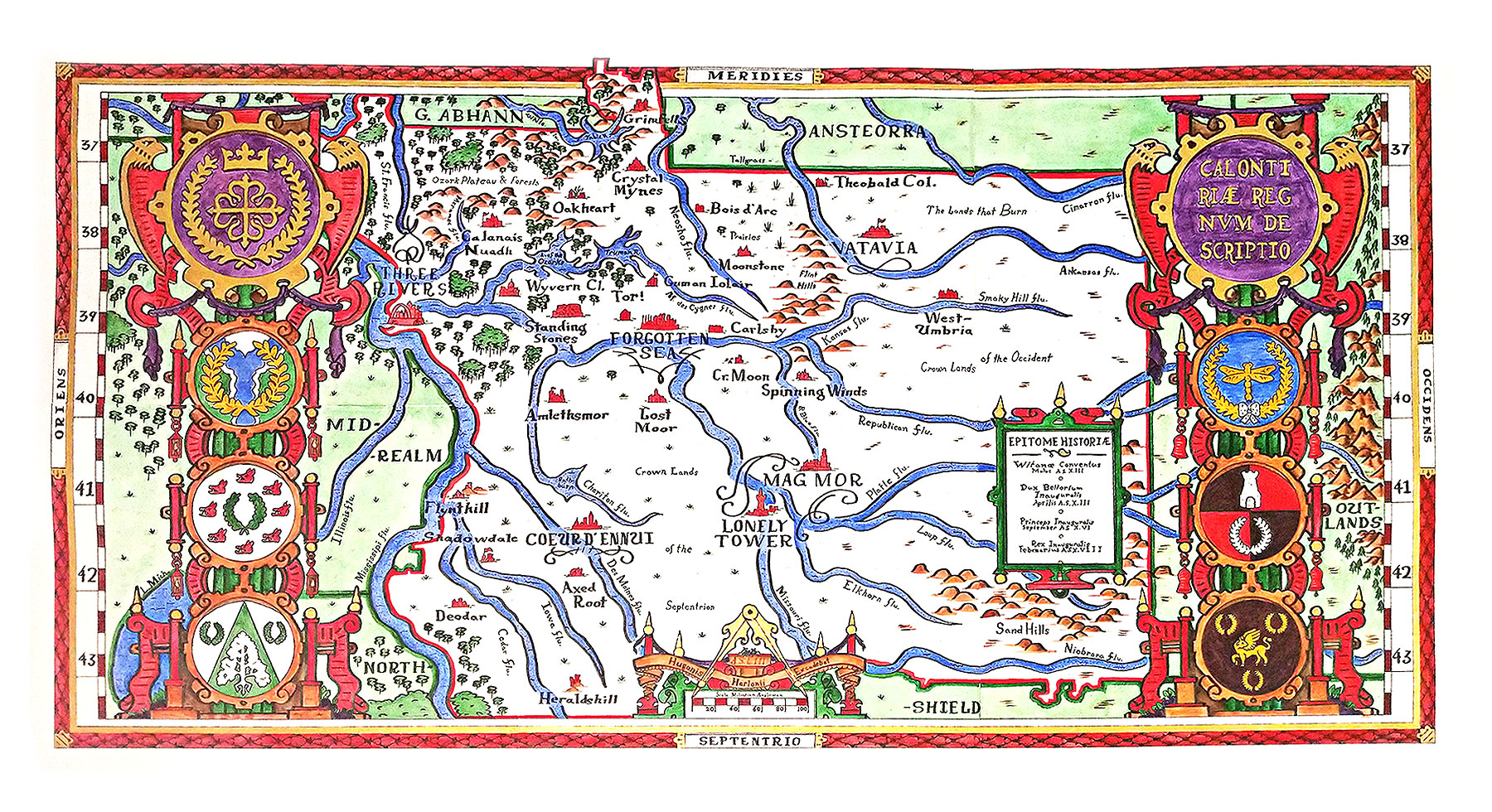 A pressed-into-service phone camera photo of the final paints. Image has been adjusted to display (mostly) rectangularly. 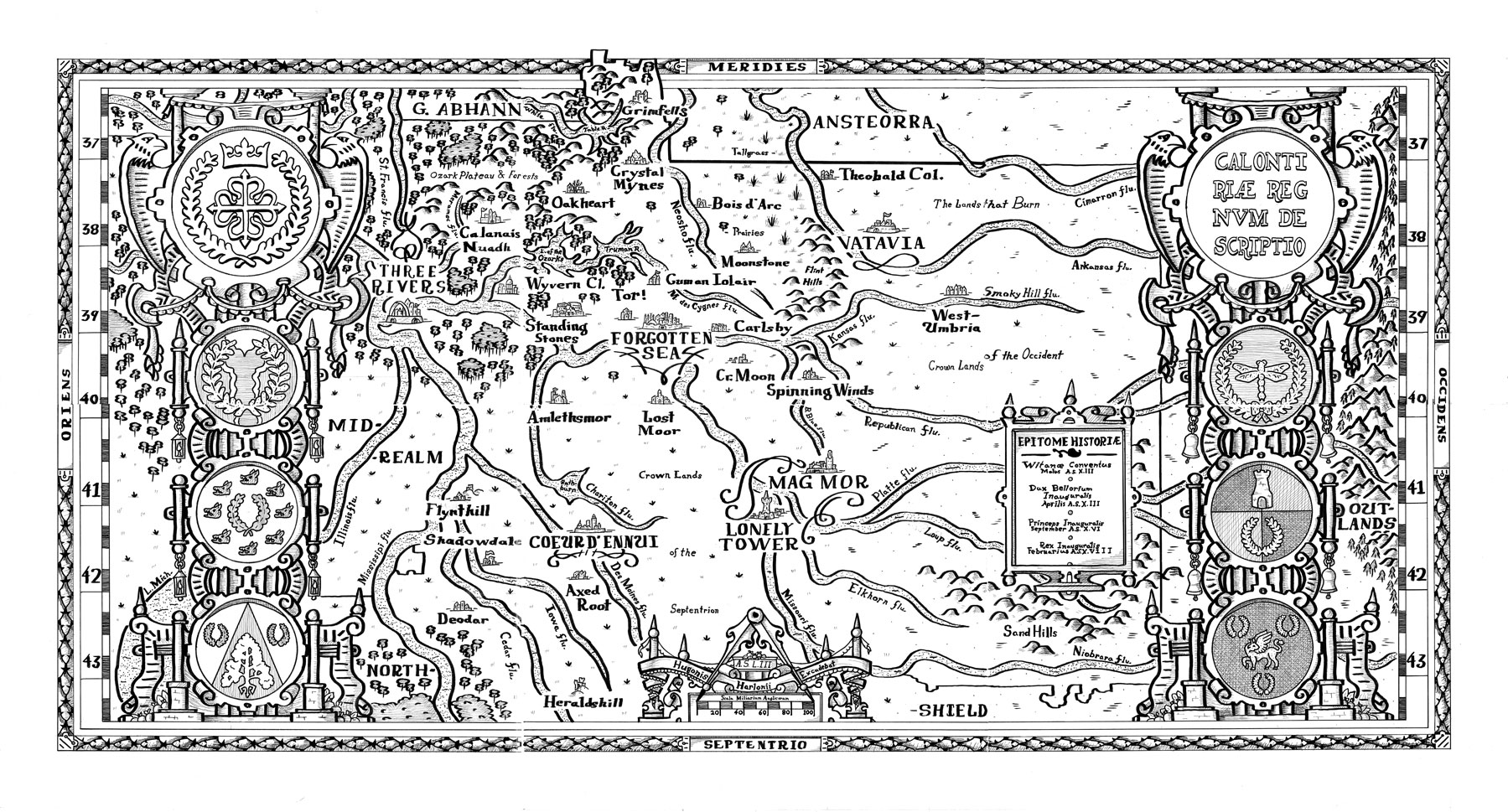 Composite scans of the map’s completed inks.
Once framed (using Italianate molding the frame shop had sitting unused as new old stock), the map was a very large five feet wide! If it were only two or three inches wider, it would not have fit in the back row of my full-size pickup! 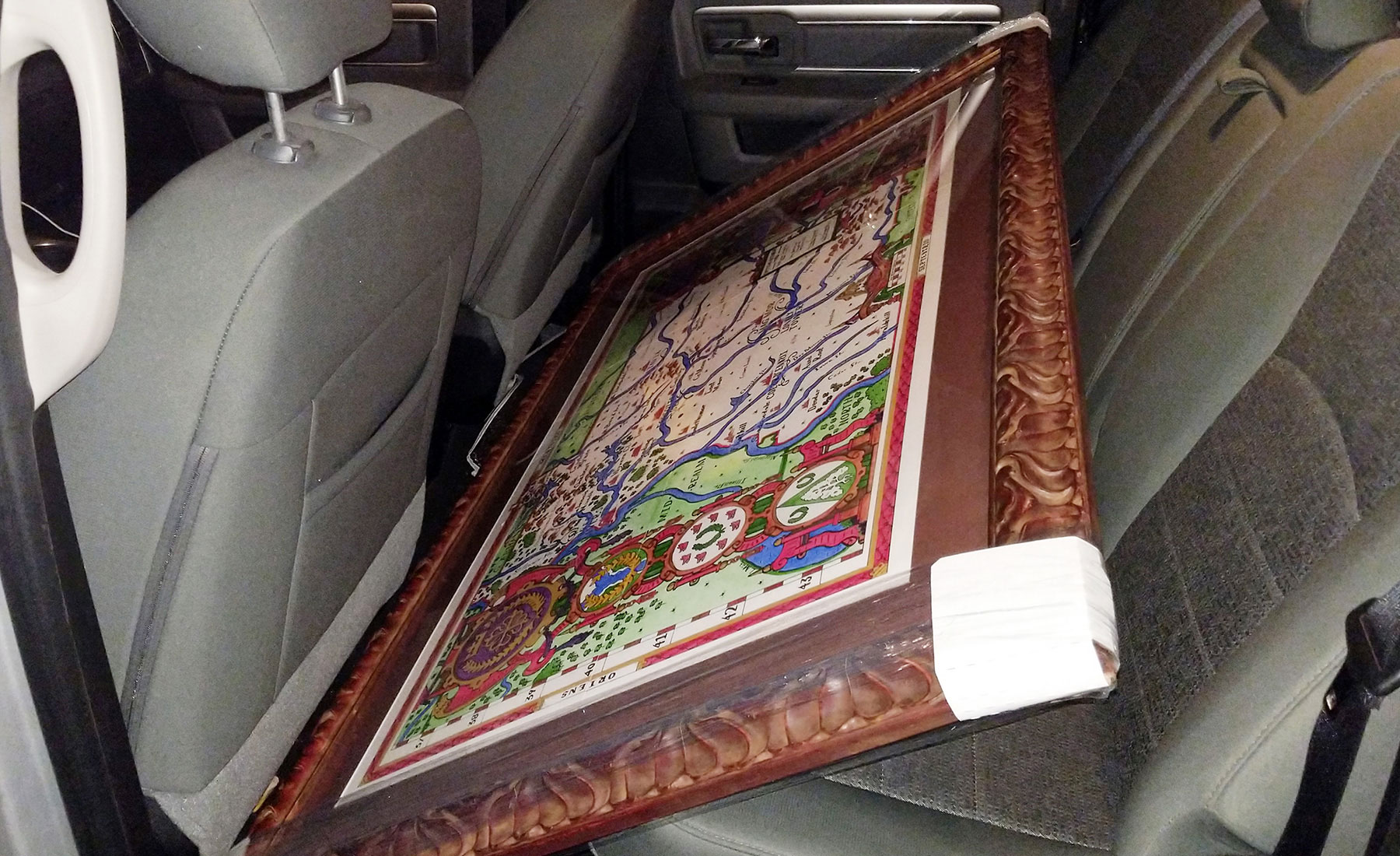 Once framed, the map barely fit into the back row of the truck. Not two or three inches to spare.

I produced a fairly dense accompanying report (which, in the frantic rush to complete the map and the paper, I now realize I left out several pertinent parts about the design decisions being made in producing the map). To offset that, I also created a single-sheet tabloid-sized handout designed as a sixteenth century broadside that would have existed at the same time as a map of this style.