Albums amicorum were yearbooks before yearbooks existed, and even could be considered to fill the same social networking outlet that we use Facebook for in our own day and age. This project was my first attempt at bookbinding, and I chose to use an interesting historic (and persona-relevant) form as one of my entries to the 2017 Tri-Levels arts and sciences competition. 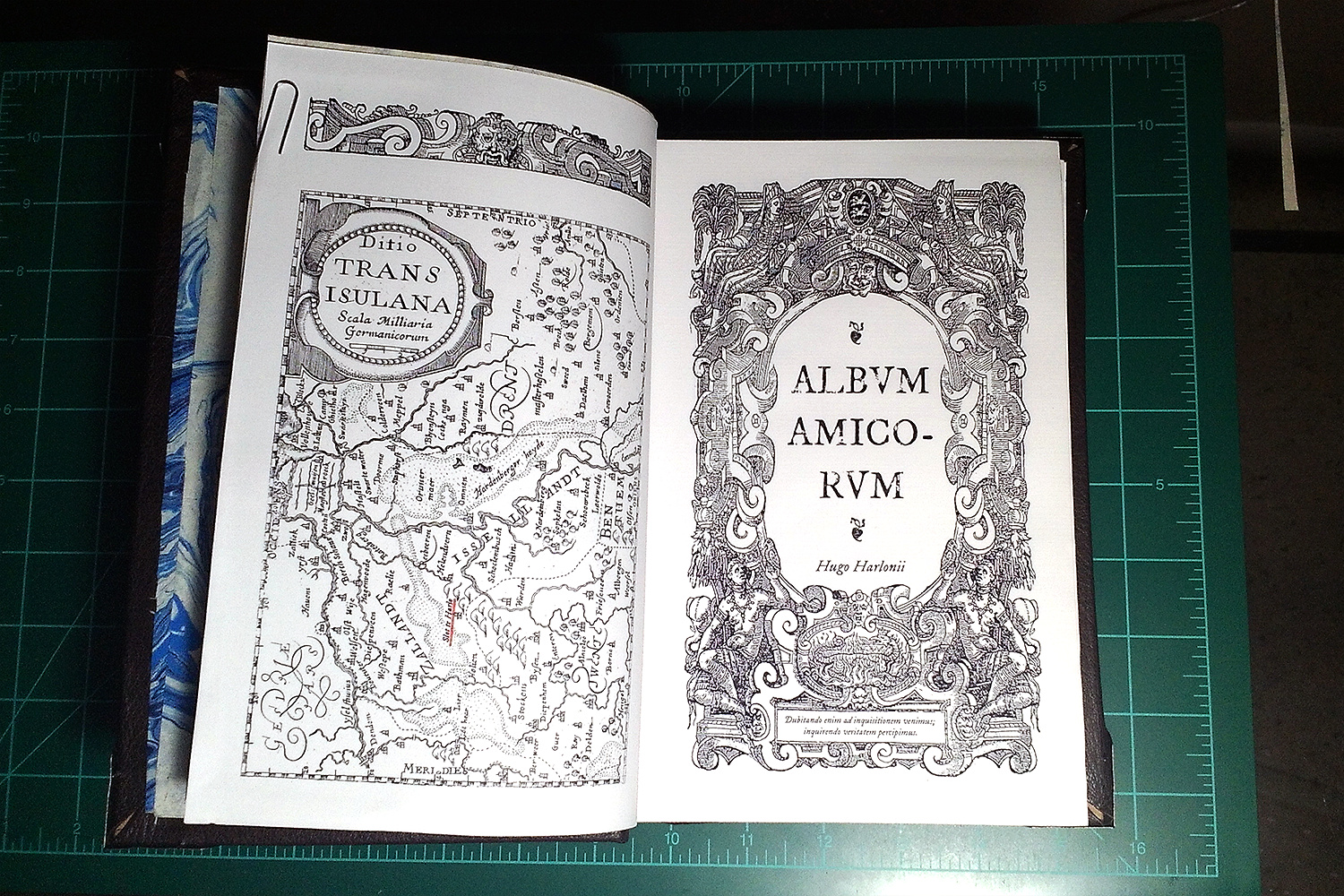 Frontispiece of the completed book, with a title page inspired by Ortellius’ own album, and a cropped version of Mercator’s map of Trans-Isulana (Overijeel, the home region I set my persona in).

This is a leather-bound book in the style of an album amicorum, or “book of friends,” which was a form of autograph book especially popular in the Low Countries and German states from the sixteenth century onwards.

While the sewn-on raised cord binding is representative of books of the mid sixteenth century through the End of Period, the content of the book – or lack thereof as found in the set of framed, blank page designs – is what sets it apart as an album amicorum. All the various page ornamentations and borders were sourced from scanned sixteenth century books, then digitally cleaned up and laid out to best fit the page sizes used in this project.

This book is blank…for now. And that’s by design.

These “books of friendship” either bound together a set of completely blank pages, interleaved blank pages into an existing book (heraldic emblem books and Latin classics were popular), or had specialty page layouts printed for the specific purpose of being an album amicorum. My book takes the last option.

Scholars would then take these books with them were they went in order to have friends, patrons, fellow scholars, other Humanists, and influential nobles inscribe the book. Over careers spanning a few decades, the books would be filled in a testimony to the personal – and professional – character of their owners.

Rarely were the books simply inscribed with a name and date, though.

Quotes, paintings of heraldic arms, Latin passages, verses (favorites and those composed just for the book), ink sketches, full-color artwork, and pasted-in engravings & prints were all included in the albums, and that’s precisely what I aim to fill my own with.

It is my aim to take the book with me to all future events over the years to come and seek out the contributions of my network of SCA & acquaintances, those figures I look up to in respect, and artists & wordsmiths I admire.

This may result in me loaning the book out for the composition of art or writing. It may be simple inscriptions with names, a quick note, and a sketch of the inscriber’s heraldic arms. Both are welcome.

So, look for me in the future and look for the book. I may ask you to inscribe something for me.

My end goal is to fill the book after the course of many years and have a record of friendships and wisdom imparted all bound within its covers. I hope many of you will help me with this endeavor by leaving words or art of your own in my album amicorum.

Books and references used in this project were a combination of modern bookbinding manuals, consultations with local SCA-affiliated bookbinders, digital references of early modern books and albums amicorum, and history books that provided greater context around print culture and the use of albums amicorum during this period.